From the depths of my bowels to your eyes this installment of The Secret Shitter brings us to the Hyatt Regency Boston. Now this particular spot can be a little confusing to find, there are two Hyatt Regencies in Boston. One Regency is the Waterfront, and the other one is well, this one. 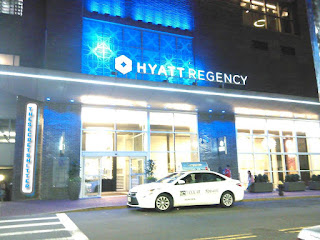 The Hyatt Regency is located on Avenue de Lafayette in the Downtown Crossing neighborhood of Boston. It is around the corner from the Paramount Theater and a short walk from the Downtown Crossing, Park Street, and South Station MBTA Stations. I took the nice walk up from the South Station MBTA Stop. I don’t know what made me think to go into this hotel, but I am sure glad that I did.

Now the hotel itself is setup rather confusing, so please bear with me as I try to explain it. You go in through the front doors, down a few sets of ramps, which will lead you to an elevator. You want to take the elevator up to the third floor, which will bring you to the hotel lobby. Why on Earth is the lobby located on the third floor is beyond me. But then again if I was in the hotel design business, I wouldn’t be writing a blog about crapping in public…

Now remember how I said it was confusing finding the lobby? Well buckle up son because you are about to go on a god damn adventure trying to find this bathroom. You want to walk down where there are two IMacs and take an immediate right down that small hallway. Now there will be a sign that says “bathrooms”, but it isn’t so clear cut. You want to walk down that hall towards a small conference room/office, or whatever the hell it is. There will be a small hallway jetting out to your right. That is where the bathrooms are located. OK got that? I promise it will be worth it. 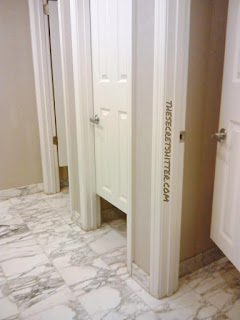 Now when you first walk in you will see a grey pattern all around you. It is like a faux marble, although it could be real, I have no way to test these things in the field, either way it looked fucking baller. Now there are four doors across from the urinals, pick whichever one you want. There is no difference here to be honest. The doors are very solid. They actually feel like a door, if that makes any sense? See sometimes the stall doors feel flimsy, making you question whether or not you actually want to stay rooted in there for very long. Although sometimes you really do not have a choice.

So now that we know the stall door feels like a door, let’s move on to the sheer size of the stall itself. To be honest it is deceptively small. You think that you are going into this tiny little thing, and then you realize that you have enough room to move around in it. There is also a coat hook up on the wall, which will come in handy considering Mother Nature is about to body slam the shit out of Boston, and if you are like me, I really do not like shitting with my winter jacket on. There are far too many variables that could go wrong. I also just purchased a white jacket for this winter, and well white doesn’t exactly cover brown.

Another thing I like about the doors are they are raised a little higher than normal. This has a twofold advantage, one being they can see you, and you can see them. No awkward run ins in this bathroom. Speaking of which, there really wasn’t any activity when I was in there. Maybe a guy or two coming in to piss, and there was one other guy which was in the clutches of El Crappo’s hand (in case you don’t know, El Crappo is the fabled crap-demon from our neighbors to the south). 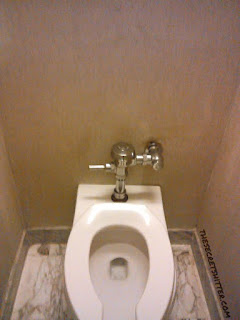 Weirdly enough, above the smoothing sounds of the hipster soft rock that was
playing, I could hear multiple toilets flushing to my left. I figured there was probably a glitch in the system. Sometimes those automatic flushers go off mid-shit.

Now that El Crappo was beginning to help my poo slide out of the rectum slide, I was able to take a closer look at the wallpaper and décor. Now the décor had grey and white marbled floors, and a light grey wallpaper. Elegant, and relaxing is how I would describe the design of this high rise shitter. I felt relaxed here, and I didn’t feel like I needed to rush. I felt as though I could take all of the time in the world here.

I was nearing the end of my little experience here in the Hyatt Regency Boston, and I had to turn my undivided attention to the two rolls of toilet paper sitting to my left. Now I took a little sample test of the toilet paper which would grace my O-ring, and to my surprise it felt awfully thin! How could a place that looked this good, cleaned this good, and felt this good have sub-par toilet paper! I sighed to myself, and I went about balling the toilet paper up and took a good, meaty swipe and the goo. Wow. The Hyatt Regency pulled one on The Secret Shitter. This paper is totally a comfortable two ply. Thank heavens because I was getting myself all worked up about this. When one wrestles with the god of hemorrhoids, you should not take any chances. 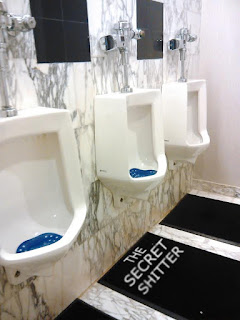 Now that I was done doing the voodoo that I do, I got up and almost walked out when I noticed something odd, the automatic flusher didn’t go off. I thought it was odd, and upon further inspection it was not an automatic flusher at all! So by my deductions El Crappo must have taken a little too much from the man a few stalls over from me. Because that fucking toilet flushed a good five times. What struck me as odd was the fact that my toilet took the whole thing down with one pull of the magical flush stick. I guess I got lucky?

So now you know about what I did, it is now time to put The Hyatt Regency Boston to The Secret Shitter’s Five Star Review System. Let us begin…

Ok So you are probably wondering what is stopping this from being the perfect shitter? Well there isn’t really anything wrong with this bathroom at all. I just need more of a WOW Factor to make this reach up to that next level. I mean it is out of the way, it has a lot of stalls to choose from, and it is clean as a baby’s bottom. Like I said, when I give out five stars I expect to be wowed in some way, shape, or form. With all that being said this is totally a great place to take a poop in the Downtown Crossing area of Boston. I mean it has exactly everything you want in a bathroom. And it is so far out of the way most people will not even be bothered to look for it, which is a good thing for you. It is almost TOO out of the way for its’ own good. I mean you do have to trek through two doormen, an elevator full of people, and a front desk just to get to this shitter. Is it cool? Of course it is! Practical? Maybe not so much. Unless you are walking right by the hotel, you probably won’t even know it is there to be honest. 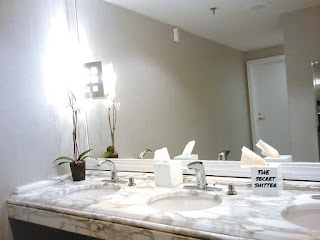 So with all of that said, did you agree or disagree? Let me know in the comment section below. Also please feel free to share this post with your friends and family!

Did you hear about our book? The Secret Shitter’s Guide to Boston Vol. 1 is available on Amazon.com in both Paperback, and Kindle form! Click here to get it All of the cool kids are getting the book. Also maybe you can drop hints to your significant other and have him/her get you the book for Valentine’s Day! It is never too early to start dropping hints…