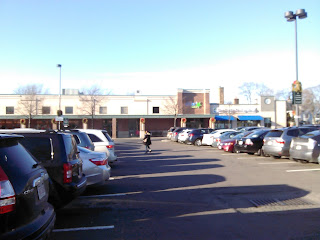 Oompa Loompa Dookity doo, I’ve got another shitter for you. This time I saddled up my horse and headed down over to Cambridge, or is it Somerville? How about we call it Camberville for now? My next adventure took me to good old Porter Square. Now I was in this part of town visiting an old friend, but before I went over to his house, I thought I would drop off this monster crap to the dooky day care.

Within Porter Square your options are kind of limited to be honest. I had been saving this shit up since I took the first sip of my coffee in the morning. I was actually surprised at myself that I had waited so long to take this shit. So when you get out at Porter Square (from the MBTA Station) your options are kind of limited. I scanned my surrounding, meanwhile the monster is getting into position pointing himself straight down my shit cannon, then I saw it, the Star Market.

Supermarkets in America have long been a friend of my ass. I have shat in quite a few in my day, and since this was basically the only option, I decided to go in and take a look around. When you head in the entrance closest to the Michael’s you turn to your right and keep going straight. You keep all of the registers to your right, and in the Non-GMO Gluten-Free Organic meat section there will be a sign pointing to the left. Follow that sign and the restroom will be dead ahead of you. 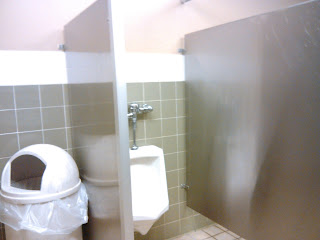 When I first walked in I will say that the décor jumped out at me. The overall theme in here seemed to be Earth tones. The walls were an array of green, white, and light brown. With the tiles also bearing the color of brown. You will also notice that there is a urinal to your left, and one stall where you and do the doo.

This stall was mighty in both size and girth. I will say for a supermarket shitter this one was quite large considering the amount of people it serves on a daily basis. When you enter the stall you will notice that there are two locks. Unfortunately, they are not for double protection. It seems like this stall was recently worked on and the hole for the circle lock didn’t exist anymore. That is ok though because right above it was a latch, which I think is much sturdier. 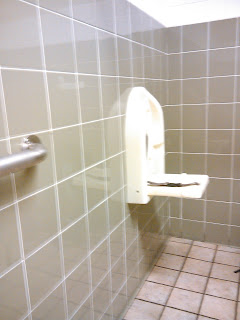 There was only one coat hook on the door. With the weather in the thirties I am in full blown winter gear. The hook held my jacket admirably, but there was no place for my bag. That is until I turned around. Right in front of me was the strangest looking contraption I have seen in a shitter to date. Now I am familiar with the baby changing stations which sometimes are installed into the handicap stalls, but this was not a baby changing station. It was a baby seat in which you strap junior into to make him witness daddy making a boom-boom. Bravo Star Market, you have introduced me to a crazy new concept in the art of shitting, actually making a small human watch you dook!

Now that I was situated I sat down to do my business. While sitting there I could hear people talking outside. There was some sort of deli, or fish counter right outside of the bathroom. However, I wish I paid more attention to my surroundings and I wish I could tell you definitively what type of counter it was, but alas next time I won’t be so aloof. So back to business, when I was sitting there a sound all of a sudden rang out. It was an alarm of some kind going off in the back of the counter. I could hear some people bickering back and forth, but the only thing my deaf ears could make out was, “Next time try to be more careful”. So with the alarm turned off I could go back to my regularly scheduled shit. With this many people in the store I thought this bathroom would be really busy. To my surprise only two people came in to take a leak, and according to my ears, only one of them washed their hands. 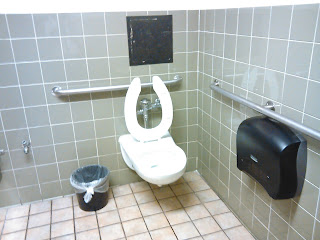 After I was done doing the honey doo doo, I had to turn my attention to the toilet paper. Upon first glance I did register it as the one ply variety. However, normally I won’t say this about one ply, but it was super soft! It was like my mind was literally and figuratively blown. I knew there had to be a catch. I don’t think science has caught up with the art of penny pinching quite yet. When I went to grab another bunch for round two of swiping, I found my red herring. The toilet paper didn’t actually come out in one continuous stream. So this very soft one ply toilet paper kept shredding in my hands as I went to pull it down. At first I thought I was tugging too hard, but after using a softer touch, it was still shredding. The top of the container was a translucent black, so I could peer inside, and there was only one roll in there with nothing theoretically stopping the flow of toilet paper. After a grueling two minutes fighting with the terrible toilet roll, I was finally done.

The toilet and sinks were both manual. There was an Xcelerator air dryer in there. I don’t particularly care for those, they tend to leave my hand a little moister than I would like it to be. I did notice that there was hand sanitizer as well attached to the wall, but it was completely empty when I went to use it. Good thing I bring my own… 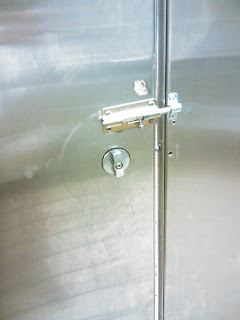 Ok so now that you know the bathroom it is time for The Secret Shitter’s Five Star Review.

The Star Market in Porter Square outperformed in every way. I really thought this was going to be a bad place to shit, but I was pleasantly surprised to report the exact opposite. It is sort of easy to find and they have that cool baby seat contraption in here. This is totally a place I would look forward to coming back to. It was bright, clean, and it wasn’t too busy. It has all the makings of a Five Star Review, except for the toilet paper. I was shocked by the quality of the one ply, and if you know me, I wouldn’t say something like that normally. The only drawback was when the toilet paper was being dispensed. I like to roll my toilet paper up, not use a shredded TP ball to wipe my ass. So with that being said, the Star Market in Porter Square scores a very commendable Four Stars.

You do know that we have a book out right? Did you know that the proceeds from the book will send me to another city? Well if you would like to see me rate bathrooms in your city, buy the book here.
Do you have any suggestions for me? Do you want to drop me a line and just say hi? Email me at; Secret.shitter617@gmail.com also don’t forget to like us on Facebook, and follow us on Twitter.

Until next time, peace.
Written By The secret shitter
Email ThisBlogThis!Share to TwitterShare to FacebookShare to Pinterest
Location: 49 White St, Cambridge, MA 02140, USA