The Corner Mall is a small collection of stores located on Washington Street in the Downtown Crossing section of Boston. There is a pretty sizeable food court, which has more Chinese noodle places than you can shake a stick at. There is also a Dunkin’ Donuts and a sushi place. Personally I am a big fan of the Chinese knock off noodle joints, so after devouring a teriyaki chicken plate with some noodles, it is almost instantaneous that my stomach begins to get upset. You never know when the urge to drop down some brown u-dong noodles of your own will strike. 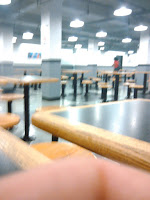 There is a bathroom located on the basement level at the corner mall. It isn’t very hard to find once you get into the food court itself. There is a large sign that says “Additional Seating Available Downstairs”. Just follow the damn sign. It really isn’t that hard.

Once you get downstairs there will be a plethora of tables and stools, and a lonely security guard sitting by himself looking at the entrances to the bathrooms wondering what his life has come to. The bathrooms share a common entrance. On the left hand side there is the men’s room, and on the right hand side there is the woman’s restroom. I would advise you to go to your gender’s respective facilities.

Upon entering the men’s room, you will notice a stark change in atmosphere you are accustomed to. The men’s shitter is actually covered in black tiles. It is actually kind of weird when you really think about it. You are used to light, and airy colors when it comes to shitters. The stark change kind of leaves you bewildered, or maybe it is the smell of piss that permeates around you. 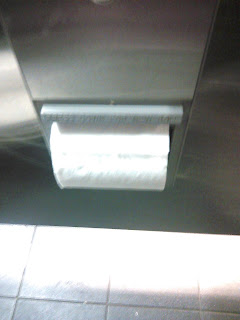 If the smell is any indication about the cleanliness of this bathroom, you are in for a rough time shitting. I know the large homeless population uses this bathroom as their home base. This is probably the reason why there is security posted up down there. Anyways I seem to be getting off the topic. When I walked into the bathroom I couldn’t help but notice a junkie looking dude just washing his arm pits in the sink. I mean this dude had his duffle bag (which he most likely lives out of) on the ground, clothes all over the sink, and he was literally using that foamy soap to wash his pits. I do have to commend the gentleman on his hygiene, at least he won’t smell in public. I am sure that guy has bigger problems on his hands instead of worrying about little old lonesome me seeing him wash his pits with foam soap on a Friday afternoon.

So to continue, there are only two stalls for you to make your choice. There is a handicap stall, and a normal sized stall. Now on this day the stall I would normally use (the handicap stall) was being occupied by a very boisterous shitter, so I had to opt for the normal man stall. I got inside of the stall and noticed how much of a chore it was to get the damn lock to well, lock. It was one of those situations similar to the Faneuil Hall North Building review, I had to make my shit as large-sounding as possible to ward off any would-be intruders.

As I got the door situation under control, I had to find a place to hang my bag up. Unfortunately for yours truly, there was no coat hook available in this particular stall. It seems as though the hook itself had been taken completely off of the stall door. “this is fine, remember your training” I thought to myself. Usually I will just place the bag next to my feet and hope for the best. Well I had to kick away some toilet paper on this particular day. It seems like it was trying to soak up some unidentified liquid which was on the ground. Again, this isn’t really that big of an issue, I HAVE seen worse places than this before. 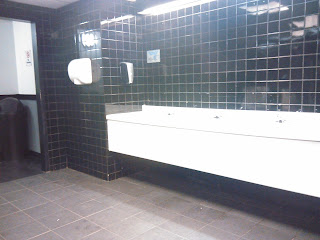 So I go about my boo-pooping business. I was grunting and straining loud enough so others would know not to disturb me. In the process of doing this, I happened to glance down to my left and turned my attention to the toilet paper holder. Anxiety instantly came over my body. There was no fucking toilet paper in this stall! What is a secret shitter to do? Well upon further inspection I did notice that there seemed to be a roll lodged up in the top part of the toilet paper holder. Unfortunately, the damn thing was locked. On a side note, I had lost my keys a week prior. You might be asking yourself “why is this relevant to a story about shitting in a crappy strip mall”?  Well the reason why this becomes relevant is due to the fact that on my keys I had a Leatherman multi-tool. If I had the damn Leatherman, I would have been able to wedge the damn knife in the little key hole and unlock the fucking thing. However, the poop gods would not be with me on this day.

Now I am a small guy, I lumber around at a staggering five foot two inches. Being on the shorter end of manhood, I have been granted the gift of having “petite” girly hands, as I call them. As I sit here shitting my brains out from the damn u-dong noodles, I am trying to size up the fucking toilet paper hole to save my underwear from becoming a victim of being used as improvised toilet paper. So now here I am shitting wedging my hand (wrist deep by the way) up this fucking toilet paper dispenser, hoping to Buddha that there are no needles stuck up there. What made it worse was every time I thought I had a grasp of the toilet paper, the gods would let it just slip upwards escaping my grip, and putting the toilet paper back into its’ original starting position at the top of the dispenser. Now I can continue with describing this terrible ordeal in great detail, but I will spare you today. All you need to know is that it took about fifteen minutes of me fucking around to get the damn toilet paper to drop. So after all of that fuss and excitement, I had to get the fuck out of that bathroom. Truth be told, I totally forgot to take any notes about the toilet paper quality. I vaguely remember it not being of the highest quality, but I cannot attest to anything concrete. If you guys and gals take anything away from these writings know this; I will report to you only the facts. Not a single fabrication is made in any of my writings. I will say that in the course of me wrestling the toilet paper dispenser, that there were innumerable amounts of people who came through that bathroom. I am actually shocked that this report has any pictures to go along with it.

The only thing going for this bathroom is that the automatic flusher for the toilet was not on a time delay. Everything else in the handwashing department was also automatic. There was only one option for drying your hands, and as you can imagine, it was a shoddy old air dryer. After snapping the few pictures, I could, I got the hell out of that hell hole, vowing to myself that I would never come back, unless it was to piss.

So now that you are in the know, I would like to turn your attention to the Secret Shitter Review. This review is based off of a five (5) star point system. Let us begin…

You are probably sitting there wondering why I gave this bathroom a ONE STAR RATING even though it didn’t score any ones on the review itself. Well if the damn junkie washing his fucking stank pits in the sink didn’t set the bar for the bathroom, the subsequent tussle with the toilet paper dispenser totally bombed the whole damn thing. I legit spent fifteen minutes wrestling with my hand wrist deep up the dispenser trying to extract toilet paper from it. I thought I had seen bad shitters, but this one sets the bar low here on season two. Now the astute reader will see that I have added a new category, which is Cell Phone Reception. After doing about twenty-three reviews, I think that this is something that also needs to be examined in full when going to the bathroom. How many people entertain themselves with their phone while they are shitting? I know everyone who reads this does, so don’t act like you don’t. As I said in the review I really couldn’t remember how bad the toilet paper itself actually felt. It could be average for all I know, but personally I don’t give a rat’s ass. You combine this with the fact that there are a boat load of people going in and out of the bathroom and you have yourself a recipe for a really bad review. The only positives to take out of this review is the fucking décor of the place, and even that only scored a tad higher due to the fact it was different, with its’ black and grey color scheme. So there you have it folks, the only high point about this shitter is the color scheme of the bathroom. 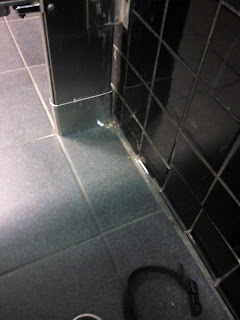 There will also be a paperback version available of The Secret Shitter’s Guide to Boston, Volume 1 available soon!
Written By The secret shitter
Email ThisBlogThis!Share to TwitterShare to FacebookShare to Pinterest
Location: 417 Washington St, Boston, MA 02108, USA