It is about high time that I review a bathroom from my good old hometown of Winthrop Massachusetts. Winthrop is the little island suburb right outside of Boston. Ok so you most likely haven’t heard of it. Have you heard of East Boston and Revere? Yup we are right next to those towns. It is convenient to Logan Airport, and it is right along the MBTA’s Blue Line. But I am not here writing a welcome letter for the town (if you would like me to, um you can email me, but it is going to cost you). No people I am here to find a bathroom to take a dook in. Even in my small town, while I am running around doing my errands I still need to poop sometimes, and that brings me to our next location, The Winthrop Public Library. 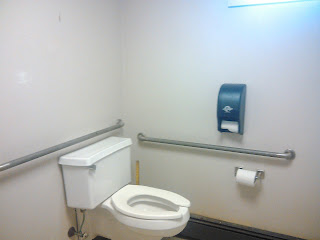 I like going to the Library. There is a small museum which I am sure is open sometimes, if you ask, and what it is in it, well I have no idea. But I do like to read, but I am not allowed to take books out due to the fact that I owe them money from a late book I forgot to bring back. I think it was on Ham Radio, but either way, that is not the point of the story. See nestled in the basement, up the ramp from the children’s department, there is a little bookstore. It is surprisingly stocked with a lot of books and LP’s. Sometimes you can find some cool stuff down their dirt cheap. I got a bunch of pictures from an amateur astral photographer for like five bucks. But again, that is not the point of the story. I was browsing some of the books when I felt the urge to drop some literary logs of my own. Thus we begin… 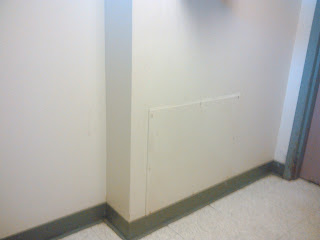 So to gain access to the restroom you need to go and speak with the person who is working in the children’s wing of the library. There is a key attached to a large piece of wood that they will give you. When you secure the key, you can begin to write some brown poems of your own.

To find the restroom is quite easy. There is a big fucking sign that says “Bathrooms” with an arrow, and two clearly marked doors. If you got the key, then I have faith in you that you can find the bathroom. I mean you don’t have to be a rocket scientist to find it.

Next thing you will notice is once you open the door, you will be met with a rather roomy single bathroom for your pooping pleasure. This bathroom is massive. Although my memory is a tad hazy, I do not clearly remember whether or not this bathroom had coat hooks in them or not. But don’t worry, the bathroom is so big that you can lay your backpack down on one side and have zero fear of any poo-water getting anywhere near your belongings. 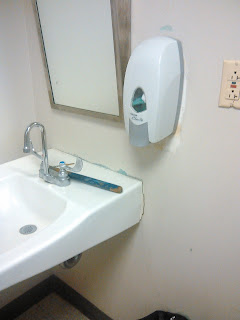 The walls in the bathroom are absolutely atrocious. They are dark grey in color, and are in terrible need of a fresh coat of paint. I mean it looks like no one has paid attention to this bathroom in about twenty years. Do not even get me started on the tiles in here. Well actually I guess I have to get started If I want to do a thorough review. Do you remember when you were in high school? Do you remember what the floors looked like? Ok now that you have that picture in your head, that is the exact same style that the floors are made of. Very drab, and not anything to write home about. To be honest you can’t tell if they are dirty or just old. It is most likely the latter because the bathroom didn’t have any sort of debris in them. The bathroom appeared to be clean.

The next thing we have to address is the toilet. Man maybe we American’s are not build like we used to be. I am pretty sure that Andre the Giant’s feet would be dangling off of this high rise pooper. It is very rare that I write about the height of a toilet, but something about my feet dangling off of one makes me a tad uneasy. I know no one can bust through and come in, but damn. We are talking a good four to five inches off of the ground. I damn near needed a ladder to get up there. 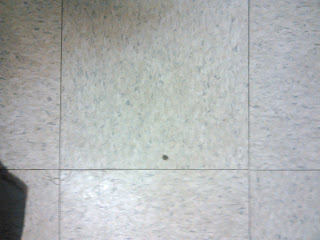 Enough about my height issues, let’s move on to the final crescendo in our public pooper review, the toilet paper. I could tell by looking that this toilet paper that my asshole was going to feel as though it had been raked through fire glass, and boy was I right! This is the standard Uncle Sam’s Sandpaper Medium Grit # 172 in lieu of where the toilet paper should be. Government issued anything sucks donkey balls, let alone toilet paper. I would hate to know what they give out at Red Cross Camps around the world to people. But that is a whole totally different story unto itself.

So after I finished wiping and crying I had to flush the toilet myself like a gawd dang farmer. To make matters worse I had to turn on the faucet like a peasant. As I returned the key to the front desk I scurried off into the sunset bow-legged with the memory of that dastardly toilet paper etched into my soul… 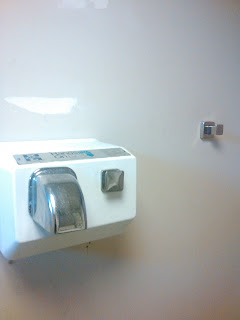 Yup that was a toilet, and I pooped in it. That is the sentiment that I hold when I think of the Winthrop Public Library. The pros to this toilet is its’ seclusion everything else just sucks about it. But it really isn’t the Library’s fault. Something something public funding. I don’t expect a whole lot when I go into government buildings. I expect there to be a toilet to use which was state of the art in the 1970’s, and when you go in with that expectation, then you really cannot be disappointed. I mean the only good thing about this is that I didn’t have anyone banging on the door to get in. Most likely because I was in a small town library. If I was going about my business in town and I needed to crap, would I come back? Sure I mean we have seen worse shitters here, but I would totally try to find another spot if I had the option, or I could go home and poop. That might have been a better option.

OK so you know what is great about the library? There are tons of books to read! You know who else has a book? US!!! You can mosey on over to Amazon and pick up The Secret Shitter’s Guide to Boston Volume 1, it is never too late to be in the know. There are literally dozens of people who have been satisfied by our poop knowledge. So go and buy the book today, be a trendsetter.

Remember until next time… Peace. 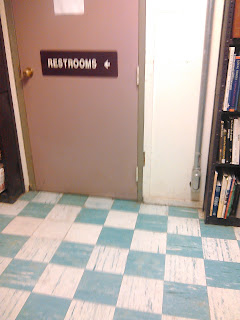